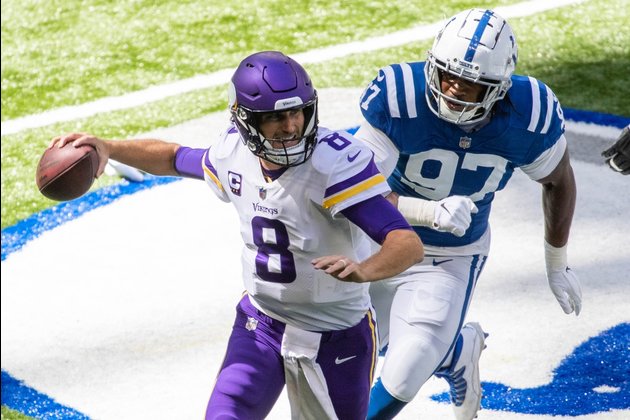 Jonathan Taylor rushed for 101 yards and one touchdown and the Indianapolis Colts intercepted Kirk Cousins three times en route to an easy 28-11 victory over the visiting Minnesota Vikings on Sunday.

Philip Rivers completed 19 of 25 passes for 214 yards, one touchdown and one interception for Indianapolis (1-1). The touchdown throw was the 399th of Rivers career and he is one shy of becoming the sixth player in NFL history to reach at least 400 scoring passes.

Cousins was just 11-of-26 passing for 113 yards in addition to the interceptions for the Vikings (0-2). Dalvin Cook rushed for 63 yards and one touchdown on 14 carries but Minnesota totaled just 175 yards and 12 first downs.

Indianapolis had 354 yards, 24 first downs and controlled the ball for 38 minutes, 25 seconds.

Approximately 2,500 fans attended the contest at Lucas Oil Stadium in the midst of the coronavirus pandemic. The Colts decided on the figure after dissecting NFL and Centers for Disease Control guidelines.

Minnesota received a 21-yard field goal from Dan Bailey after moving 75 yards on 13 plays on the opening drive and then repeatedly sputtered on offense.

Indianapolis controlled possession for the remainder of the contest with short passes and runs by Taylor, who carried 26 times and became the first Colts rookie to top 100 rushing yards in a game since Vick Ballard had 105 against the Houston Texans on Dec. 16, 2012.

The Colts moved ahead to stay on Taylor's 5-yard run with 11:45 left in the second quarter. The defense got in the act for the team's next two points as Denico Autry pressured Cousins in the end zone and Buckner finished him off for the sack and safety to make it 9-3 with 4:54 remaining in the half.

Blankenship booted field goals of 28 and 38 yards later in the half to give Indianapolis a 15-3 advantage. He added a 38-yard field goal with 9:27 left in the third quarter to increase his team's lead to 15.

The Vikings had just 17 yards in the third quarter, and Cousins was 0-for-3 passing with an interception in the stanza.

The Colts remained in control in the final period as Rivers tossed a 2-yard touchdown pass to Pascal and Blankenship kicked a 44-yard field goal to make it 28-3.

Cook scored on a 3-yard run and added a two-point conversion run with 5:20 left as the Vikings trimmed their deficit to 17.