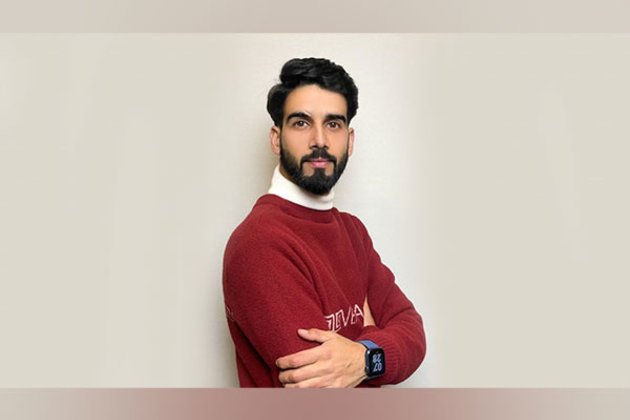 Srinagar (Jammu and Kashmir) [India], November 22 (ANI): As the pandemic forced businesses across the world to rethink their strategy, perhaps, in terms of impact, nothing stands out as much as the mainstreaming of the hitherto side-lined gig economy. With the freedom to work anywhere, we have a generation of people with more options at their disposal.

With this, a valley boy, Rubaitul Azad, has been in the world of graphics and web designing for years and today his clients include renowned brands across the world.

Hailing from Gulshan Nagar area of Srinagar City, Rubait was inclined towards gadgets since childhood and has spent a good year of his life learning the skills that helped him to create his client pool which includes local, national and international brands.

Sharing his past life, he said that his performance academically has never been strong. As a student he was always disinterested in studies. What fascinated him was designing and coding. With fewer learning design platforms, he opted for various online platforms to master the skills. After mastering the skills, he got a good hold over software like Photoshop and other photo editing software.

In 2012, Rubait started freelancing with a number of companies which gave him the confidence to work harder.

"In the beginning, it was very difficult but I have always enjoyed my work. My experience as a freelancer has been full of ups and downs. I used to study online video lectures on designing and I still do so because the world is very dynamic and one has to keep up with all the trendy things happening. I feel satisfied that after seven years of sheer hard work, I have built up good relations with my clients," said Rubait.

Till now, he has worked on more than 300 plus projects with reputed international, national and local brands.

KTP Exports Private Limited Singapore, Shanghai Uniforms Singapore, Kinpin TV are some of the companies Rubait has done projects with. His designs have been used by more than 100 industries and establishments.

On graphics-sharing platforms - Unsplash and Pexels, Rubaitul has a whooping number of views of more than 52 lakh plus. His plans are to further expand his work and create awareness of the freelancing and gig economy which is thriving across India and the rest of the world. Freelancing is a mode of work where the employees are hired temporarily rather than full-time.

"Many people of the valley are not aware of freelancing. It can be a good source of employment for those who don't want to be confined to office working time and norms," he said.

He said that freelancing is not only restricted to any age criteria; rather people of all ages, including growing children and elderly people, can make their careers in this field.

The worldwide pandemic caused due to covid infection led companies to cut down their staff, and the same situation led to the growth of freelancers. Because of the opportunities in the field of freelancing, many people moved to it to come out of the economic crisis.

Unlike conventional jobs, one does not have to provide the certification in order to be hired. "The job demands a skill set rather than a mere degree. There is no age to retire. People retire from their jobs and come to freelancing to pursue careers. It allows you to work without someone asking you for degrees and grades," he said.

A Niti Aayog study on "India's Booming Gig and Platform Economy" has estimated that in 2020-21, 77 lakh (7.7 million) workers were engaged in the gig economy. According to the report, the gig workforce is expected to expand to 2.35 crore (23.5 million) workers by 2029-30. At present, about 47 per cent of the gig work is in medium-skilled jobs, about 22 per cent in high-skilled, and about 31 per cent in low-skilled jobs. The trend shows the concentration of workers in medium skills is gradually declining and that of the low skilled and high skilled is increasing.

Rubait further said, "People starting careers in the gig economy have paved the way for themselves to reach a higher wavelength. It is important to be prepared for the fact that every opportunity comes with an equal number of obstacles and difficult things."Freelancers work from home so they have to work at their familiar places. It all requires a laptop and an internet connection and a skillset.

"It is not a mundane 9-6 hours job but a job where a worker decides his or her own working hours. You can take projects and ask for the payment of your choice. The more projects you take on, the more money you can make. One has to win the trust of the client. If your skill sets are not comfortable with the project, you can turn down the project," he added.

He further said that it empowers women and specially-abled people and those who live in rural areas. "The gig economy in coming years will dominate the world," he said.

Making a good and friendly reputation among clients is what he stresses on most and considers the key to being successful.

He said his goal is to promote the gig economy in Kashmir and encourage local youngsters to enter the world of freelancing. To engage the youth into freelancing, he started giving freelancing courses to students. Over the course of the last three years, he has instructed more than 200 students, and as per him, a significant number of those students are now successful freelancers.

It was not a cakewalk for him. In the beginning, he had to face a lot of criticism from his parents and relatives.

He said, "In Kashmir, people think only those who get jobs that possess degrees. Very few people value skills. The mentality should change. The degree is nothing if one does not possess skills."He said apart from studies, students should go for skill development courses too.

While giving a message to youth, he said, "Listen to your heart and head together and make choices that are in your best interests, since in the end, what really counts is how happy and pleased you are with both yourself and the job that you do. My theory is that our faces should be able to convey the delight and enthusiasm we have for the task we do." (ANI)